Creators of Fine Digital and Dice Based Games

May 6, 2015 / / Comments Off on Games Gone Good: Super Metroid’s Introduction

Having received lots of feedback from people about Regeria Hope, I’ve realized how unfun it is to have someone write bad things about your game up on the internet. Having previously written about Gods Will Be Watching, I feel pretty bad about what I wrote. So instead, I’m going to look for things that games do extremely well and praise them, So to start, I’m going to start with the introduction to Super Metroid. 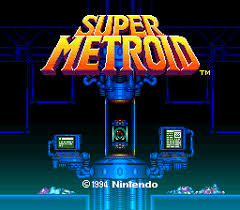 Image from wikitroid. All rights Nintendo.

Specifically, the section from when you power on the game to when you start seeing enemy’s other than Space Pirates. Let’s start with the introduction.

As soon as your turn the game on, you know you’re in for something special. A black screen. The Metroid screech. Cue creepy music. You’re trying to figure out what you’re looking at, as the screen zooms in on dead bodies and pans across the screen. Then the music builds, the camera zooms out, and BAM! The Metroid theme starts, with the baby Metroid from the 2nd game in an abandoned lab full of dead scientists.

Thanks to ErrentMind on YoutTube for the video. The first 35 seconds are the intro, the rest is the story retelling.

Right away, your interest is piqued. There’s a mystery – Why is the Metroid in a lab? Who or what killed the scientists? So you rush through the game menus and start the game.

At the start, the story telling recapping the first two games is a nice balance of opening monologue ( which I’m usually not a fan of, but in this case it’s typing logs on a computer terminal, which is a fast way to get new players up to speed) and flashbacks showing the action. You get the sense that Samus is replaying the past events in her mind as she’s typing out the logs, and you get to see what is going through her mind as the actions happen.

I usually prefer showing, not telling in action games, and showing and telling at the same time is OK too, especially with a character that has no other characters to talk to and bounce story beats off.

After the story exposition, you are sent off to Super Metroid’s training section: the lab. Here you get section to get used to the controls. The ominous music and the mystery provided by the title screen propel you along the lab, until you see something familiar… It’s the same lab apparatus and dead bodies from the title screen!

However, something is missing! The Metroid! Where did it go? Quickly, you rush to the next screen, and keep running until you find the Metroid, and it seems like everything is going to be OK. Maybe this is going to be a very short game? But something’s up, you can’t leave the room, and you can’t pick the metroid up. Suddenly, Ridley, Samus’ nemesis appears!

By this point, you’ve probably been itching to shoot something, but you weren’t expecting a boss as your first battle! It was very brave of Yoshio Sakamoto to put a boss battle here, but it shows that he know exactly what’s he’s doing in regards to pacing the game. There’s been a reasonably fast build up to this point, and he’s trying to sell the rest of the game to you.

There’s 2 important things about this battle:

1. It’s impossible to lose. Not that you know it during this fight. You’ll try as hard as you can to win the first time, but get your energy level under 30 and Ripley leaves. This means you’ll always feel like it was a close fight the first time you fight.

2. It’s possible to “win” this fight. This is important for replayable games, since seasoned players will want to test their skills. Shooting Ripley 30 times is enough for him to drop the Metroid, which means you won. It doesn’t change the outcome, since there would no game to play otherwise, but advanced players can do it for bragging rights.

So you finish fighting Ridley, and right after a tense surprise boss fight, the lab starts it’s self destruct sequence. A timer appears, sirens wail, and immediately you know you need to book it out of there. This section is doing a few things:

1. It tells you that self destruct sequences are a thing that Super Metroid does. The next time it happens, you won’t be as surprised.

2. It amps up your excitement in the game even more. You’ve got to get out of there now!

3. It gives you a chance to prove to yourself you’ve learned how to move Samus around fast enough to escape.

4. It shows you remembering areas you’ve been in will be useful later in the game, and you’ll be doing some backtracking to finish the game.

So why is the Ceres lab section in the game? Why not just say the baby Metroid was stolen and start directly from Zebes? Here’s why: The Ceres lab is basically a 5 minute summation of Super Metroid. You’ve got your exploration, your mystery, and your heart pounding boss fight and escape sequence right there at the beginning of the game. If someone was going to give that out as a demo and see if you wanted to finish the rest of the game, I’m sure the answer would be a resounding YES! You’ve played through the story the game was trying to tell you, the most exciting parts of the game have been shown to you, and you’re hooked. For all intents and purposes after playing that section, you ARE Samus.

It’s very important to make the player as engaged and excited as you can in the first 5 minutes, either through a mystery, which I try to do with Regeria Hope, or by making the player feel badass, which Super Metroid does and another Metroidvania, Castlevania: Symphony of the Night does by giving the player very powerful weapons at the start of the Alucard section. You’ll see many other great games make their first five minutes very exciting as well.

Ok, that’s enough writing for now. Next week, I’ll write about the introduction to Zebes, and how it draws the player in with immersion and creates a feeling of isolation.

Theme by Anders Noren — Up ↑